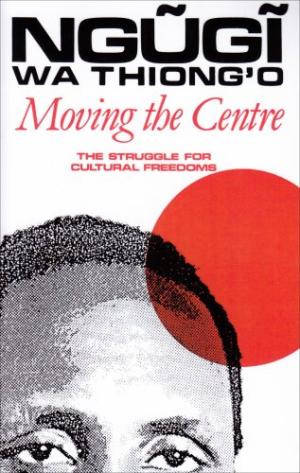 Moving the Centre: The Struggle for Cultural Freedoms

In this collection Ngũgĩ is concerned with moving the centre in two senses – between nations and within nations – in order to contribute to the freeing of world cultures from the restrictive walls of nationalism, class, race and gender

Between nations the need is to move the centre from its assumed location in the West to a multiplicity of spheres in all the cultures of the world. Within nations the move should be away from all minority class establishments to the real creative centre among working people in conditions of racial, religious and gender equality.

If reading Ngugi’s fiction can stir people from stupor, reading his non-fiction works can only do that in greater measure. He has significantly contributed to moving the center through his many years of resistance and writing both fiction and non-fiction in English and especially in Kikuyu.
—Africa Today

The compelling emotional force of this book emerges from Ngugi’s convincing emphasis on a truly universal human culture and his continuing ability to personalize large political issues and to persuasively politicize his own personal experiences.
—Choice

For a long time, Ngugi’s was a lone voice howling against the wind. Now people like Edward Said have joined in the war against cultural imperialism.
—New African