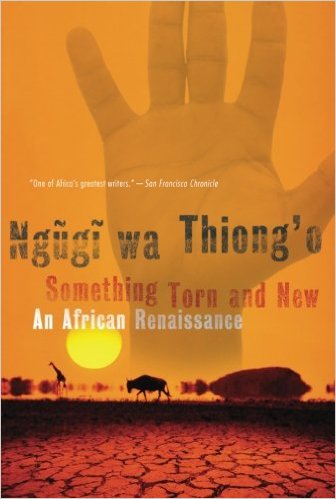 Something Torn and New: An African Renaissance

Since the 1970s, when he gave up the English language to commit himself to writing in African languages, Ngũgĩ’s foremost concern has been the critical importance of language to culture. In Something Torn and New, he explores Africa’s historical, economic, and cultural fragmentation by slavery, colonialism, and globalization. Throughout this tragic history, a constant and irrepressible force was Europhonism: the replacement of native names, languages, and identities with European ones. The result was the dismemberment of African memory.

Seeking to remember language in order to revitalize it, Ngũgĩ’s quest is for wholeness. Wide-ranging, erudite, and hopeful, Something Torn and New is a cri de coeur to save Africa’s cultural future.

African scholar Thiong’o examines the collateral damage of colonization, focusing on the erasure of indigenous people’s cultural memory along with the renaming of people, places, and objects to reflect the culture of the colonizer. Africans in the diaspora as well as those who remained on the continent were treated to the same erasure of all that preceded European conquest and colonization. Thiong’o sees similar patterns among other cultures, whether the conquered people were Irish or Native American. But his specific concern is Africa, where European colonialism has left the continent fractured and searching for wholeness. He points to a long tradition of African disaporic writers longing to reconnect to African culture. “Creative imagination is one of the greatest of re-membering practices,” and Thiong’o argues for a “re-membering” of indigenous African culture and language and ponders whether an African renaissance—sure to happen following the dark ages of colonialism—would be expressed in European languages. “Memory resides in language,” he asserts. A slim volume with a very impassioned discussion of the impact of colonialism and hope for cultural recovery.
—Vanessa Bush, Booklist