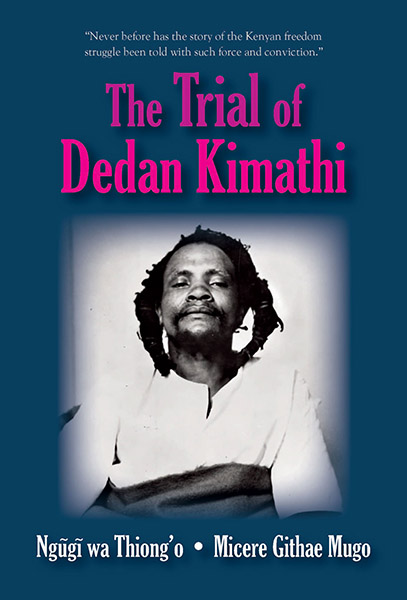 The Trial of Dedan Kimathi

First published in 1976, Ngũgĩ and his collaborator, Micere Githae Mugo, built a powerful and challenging play out of the circumstances surrounding the 1956 trial of Dedan Kimathi, the celebrated Kenyan hero who led the Mau Mau rebellion against the British colonial regime in Kenya and was eventually hanged. A highly controversial character, Kimathi’s life has been subject to intense propaganda by both the British government, who saw him as a vicious terrorist, and Kenyan nationalists, who viewed him as a man of great courage and commitment.

Writing in the 1970s, the playwrights’ response to colonialist writings about the Mau Mau movement in The Trial of Dedan Kimathi is to sing the praises of the deeds of this hero of the resistance who refused to surrender to British imperialism. It is not a reproduction of the farcical “trial” at Nyeri. Rather, according to the preface, it is “an imaginative recreation and interpretation of the collective will of the Kenyan peasants and workers in their refusal to break under sixty years of colonial torture and ruthless oppression by the British ruling classes and their continued determination to resist exploitation, oppression and new forms of enslavement.”

“What Ngugi offers is nothing less than a new direction for African writing.”
—British Book News

“The character of Miathi has too long been wrapped up in awe, mystique, and charisma without our people fully comprehending why. The Ngugi-Mugo play puts the facts bare and affords us even greater understanding of why so many shed blood that we might be free.”
—The Sunday Nation (Nairobi)

“I am delighted Waveland decided to republish The Trial of Dedan Kimathi. It is one of Africa’s most important plays that should always be in print. Bringing it back has done East Africanists a big favor.”
—Myles Osborne, University of Colorado